This event is basically a food and wine tasting that runs on weekends in March and April and is well worth the money. 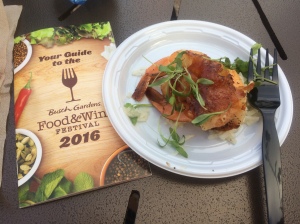 There are 27 different places to try different kinds of wine and food and they’re not small sample sizes as you can see in the photo above. The food tasting sizes are about three inches in circumference which is about the size of a standard NHL hockey puck. I recommend getting a free guide before you enter the area as the booths are numbered. The guide (in the above photo) will give you a description of what is being served and a number will appear next to the name of the booth. Those numbers will appear in the map inside the guide along with a listing of where the topiaries are, a concert line up, and a brief description of the samplers & VIP packages you can buy. Most of the food and wine booths are located in Gwazi Park which is a special events area that contains a large covered area with picnic tables and a small stage with a much larger outdoor stage nearby. The photos below are of the offerings in the Gwazi Park area which include games of chance booths like the Wine Cork Toss where you have to throw the wine cork into a wine glass, for an extra charge of course. In this area, I had the Bison Slider which is a burger with Bison meat on a brioche roll with caramelized onions and siriracha ketchup from the Southern Station. Then I went to Comfort Kitchen and grabbed some Bacon Mac(aronie) & Cheese and that was big enough to be my lunch. Then latter on, I came back here to the Chef’s Plantation to have a Duck Taco tat was topped off with sweet chili sauce. Then I went to the Gourmet Lodge and picked up a Griddled Cheese Cake Sandwich which is exactly as it sounds and that was my dinner and dessert. If all that sounds delicious to you, then you were absolutely right and I ate every last crumb of it. 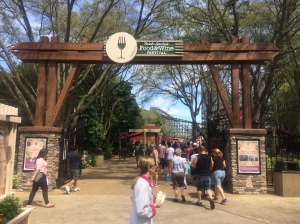 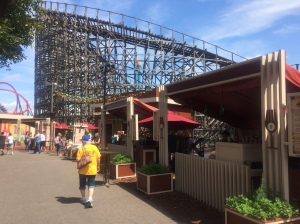 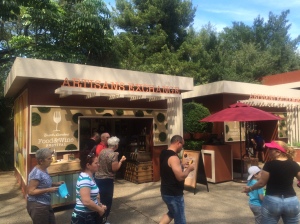 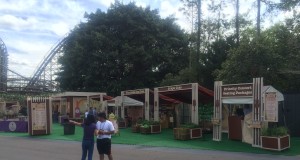 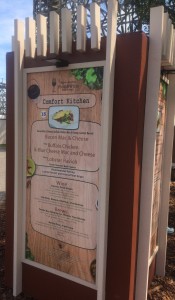 There are also several small stores where you can buy wine and food related gifts. There was one that caught my attention that sold candles shaped as various desserts and smelled like the confectionary delight when lite. There were candles that looked and smelled like Blueberry pie, Chocolate Mousse Pie, Peach Cobbler, and others.

Here are some photos of the picnic pavilion and stage area. The concerts are free with your admission and they do draw some big names here as well. 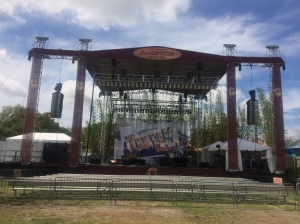 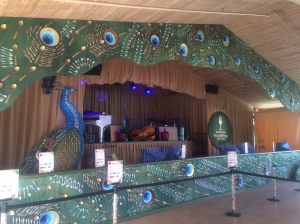 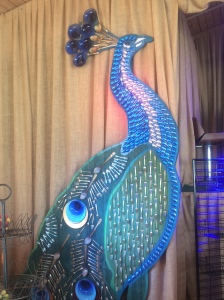 There are still several food and wine booths in the Bird Gardens area as well as some beautiful topiaries. There is one at the main entrance plaza called “Mugabi the Lion” and it is out there nearly year round. The next one is called “Topiarazzi” and it sits at to the left side of the Zagora Café right in front of the former Gwazi wooden dueling roller coaster. 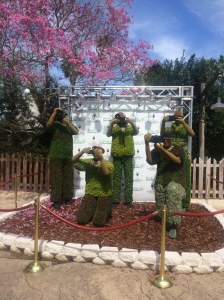 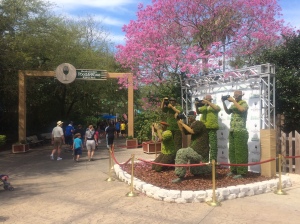 The next one is called “Sidewalk Serpent: Vertigo the Green Boa Constrictor” and it sits in Gwazi Plaza. 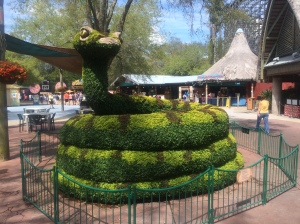 Here is one in the lagoon outside the Garden Gate Café called “Sea of Snakes: Giant Florida Octopus”. You’ll see a small box next to, or near, each topiary that describes each plant that is used in the topiaries as well. 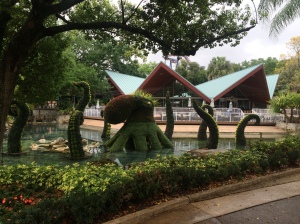 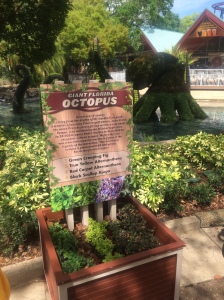 Here is possibly the most beautiful topiary I have ever seen and it is called the “Spirit of Spring” and she is located in the Bird Gardens near the Xcursions store. 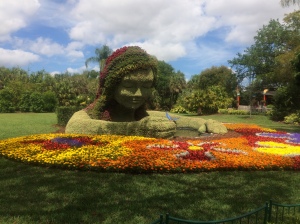 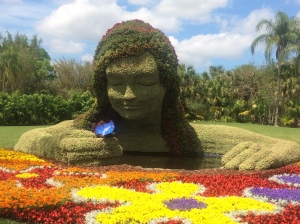 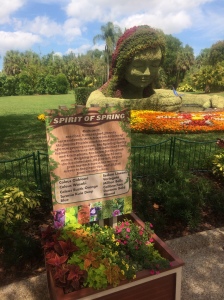 The next one is for the kids as it is called “Elmo, Big Bird and Oscar”. 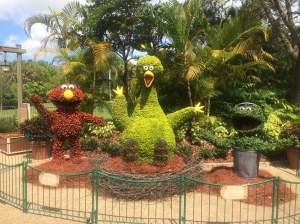 Here’s one called “Wooloomooloo and Coogee: Kangaroo and Joey” that is in the Bird Gardens near the Kangaloom exhibit. 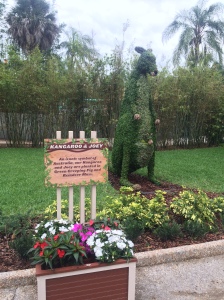 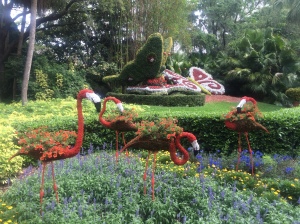 I did miss some of the topiaries called “Commerson’s Dolphins” and “Sea Turtles” but they are there year round and still beautiful to see. Here are some photos of the different wine, food, and bourbon tasting booths in the Bird Gardens area as well as some booths where you get to see, touch, and learn about different animals. 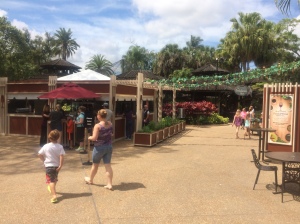 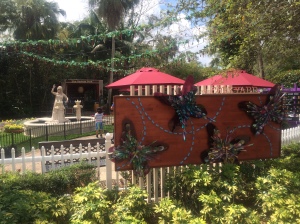 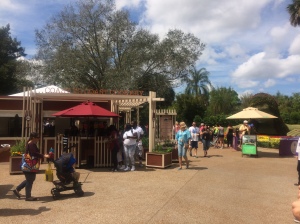 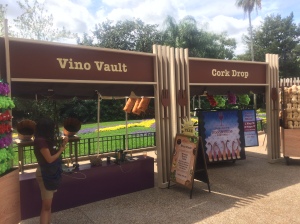 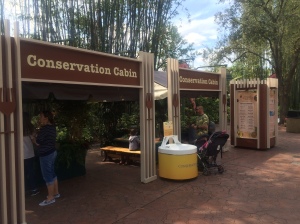 This is the area where I got my “snack” at the Coast to Coast Cookery which was the Bacon-Wrapped Prawns. A Prawn is a large shrimp that is wrapped in bacon, brushed with orange BBQ sauce, and served on a bed of slaw. The prawns were wonderful but the slaw was, well, decidedly tart, which for me, really detracted from wonderful taste of the prawns. The photo below is of the Bacon-Wrapped Prawns.

There are several spots like this under the former Gwazi roller coaster entrance where you can see a show or two. 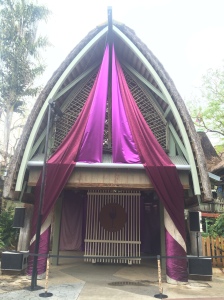 You can see the concerts and the topiaries for free as they are included in you park admission, but you must buy a pass to do the food and wine tasting which I highly recommend. I bought the five food tastings ticket and was set for lunch and dinner and I don’t eat like a bird. They sell different packages where you can buy five food tastings only, five wine tastings only, five food & wine tastings, ten food & wine tastings, or more. You can also get them combined with priority seating for the concerts as well. I highly recommend getting the pass as the food alone was well worth it. I hope you’ve enjoyed the review and I seriously hope you plan on attending this annual event in the future.