Fun Spot America originally opened in the 90’s as primarily a pay to play park with go multi level go-kart tracks, bumper boats, a ferris wheel and a large arcade in the 1990’s. It wasn’t until 2012 that they announced that they were going to triple the size of the park by adding two roller coasters, the world’s second tallest Skycoaster, and other various amusement park flat rides like a Rip Curl, Enterprise, double-decker carousel, and a Paratrooper. This will all be in phase 1, phase 2 will be a water park that will have slides that have yet to be announced. 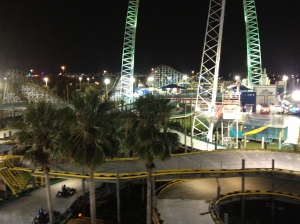 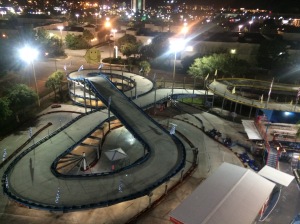 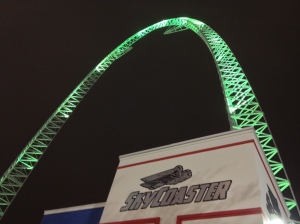 In the photos above, you can see the different multi level tracks they have as well as the 250 foot tall Skycoaster and the first phase of the parks expansion in the background. This SkyCoaster is actually the second tallest in the world behind the 300 foot tall SkyCoaster at Fun Spot’s sister park in Kissimmee, Florida, USA off US Highway 192 next door to Old Town. This attraction is an additional cost even for annual pass holders and can be paid for at the ticket booth inside the Skyliner Diner right below the Skycoaster. Once you pay for your flight, you’ll be sent up to the roof where you’ll put on your flight suit and be given your instructions. Then they’ll escort you and your party (up to three can ride at once) to the scissor lift where you’ll be attached to the two guide wires and the tow wire. 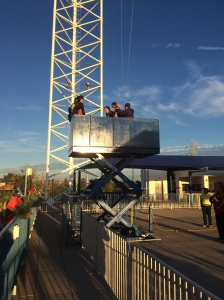 Once you’re in the flight position, the scissor lift will then lower and you’ll begin your journey up to the rear spike. 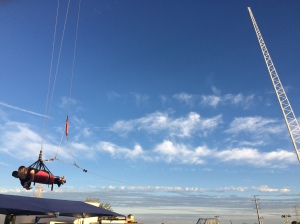 Once you’re at the top, the ride operator will begin a countdown via a loudspeaker up top by saying “3…2…1…FLY!” at which point, one of the riders will pull the ripcord and releasing the riders from the tow wire and allowing the riders to experience about two seconds of free fall before the guide wires take hold to swing the flyers out over the lagoon.

You’re allowed to swing back and forth a few times until gravity and wind resistance slow you down to a point where one of the ride operators tells you all to grab onto a ring that will bring your swinging ride to a stop. Then the scissor lift rises and disconnects you from the guide wires and then brings you to the ground. 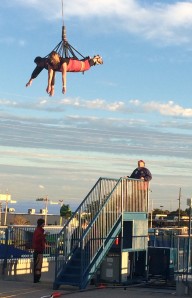 The video below is an on ride view from the Revolver which will give you a view of the small park and the surrounding area and is a classic ride that everyone in the family can enjoy. The Revolver is a Century Wheel from the Chance Rides company. 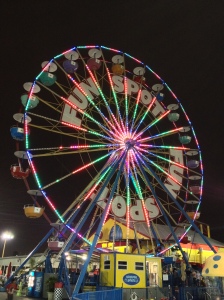 This is one of the largest double-decker carousels that Chance Rides manufactures. 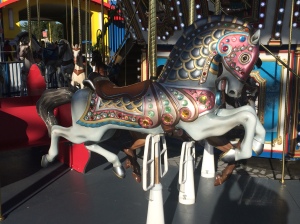 This attraction replaced the Paratrooper which operated here since the park expansion opened in 2013. I can’t find out who built this attraction or how high it goes but it is quite a thrill. The gondola itself spins as the whole thing rotates head over heels several times. I wouldn’t recommend riding this one if you have a weak stomach.

The Enterprise ride is one of the few remaining Enterprise rides from Anton Schwarzkopf who was a German designer of steel rollercoasters and other amusement type rides in the 70’s and 80’s. He was also one of the pioneers in the steel rollercoaster industry as well. This ride was formerly called the Wheelie at Six Flags over Georgia near Atlanta. 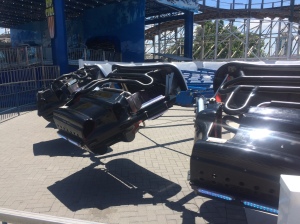 This ride was newly installed in March of 2015 and is a Screamin Swing ride from S&S Worldwide.

The actual model name from S&S Worldwide is the Screamin’ Swing but the parks can rename it if they choose to do so. It’s a pendulum swing ride that looks to be about 100 feet tall and swings riders to just beyond vertical with the ground and exceeding the height of the tower by about twenty feet or so. 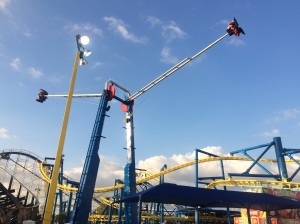 the ride itself has two gondolas that holds four riders each with two on either side facing out with individual ratcheting lap bars securely holding the riders in their seats.

This ride is really quite fun and I recommend riding in the seats facing the White Lightning lift hill. Look up as the ride reaches its apex and you’ll see the rest of the park upside down for a brief second or two. The view is even more spectacular at night when all the rides are lite up. Here’s my off ride view from multiple angles. 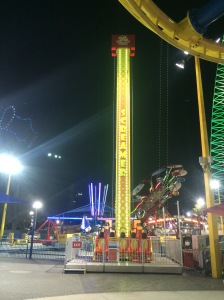 This was a new ride that was also installed in 2015 and was built by Moser Rides. It basically is a larger version of the Frog Hopper ride. This ride takes riders up to the top of what appears to be a thirty foot tall tower, then does several trick drops before dropping to the bottom via a controlled decent.

This is a standard Music Express type ride from Chance rides, you may see it at your local fair or amusement park under a different name but the ride is still the same. The ride rotates in a circle going over three hills going forwards and backwards. 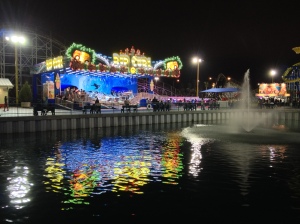 There are other rides for the kids in the Kids Spot area that include a Dragon Wagon, Fun Slide, Kiddie Swings, Frog Hopper, and others. There’s also a kids go-kart track called the Cadet.

There is even a Bumper Boats ride that has water guns on every boat and a train that runs around the park for the kiddies though it doesn’t run on actual tracks. 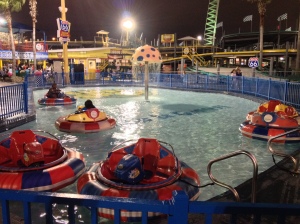 This is a new, standard Tilt-A-Whirl ride from Chance Rides. 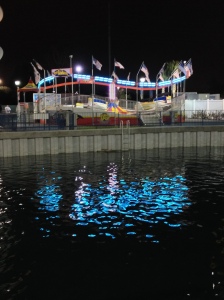 Next is the Freedom Flyer, a family suspended coaster from Vekoma. 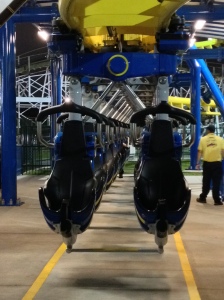 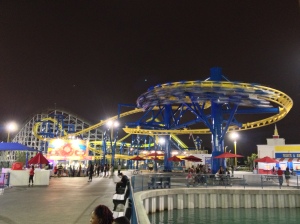 This one is 1,295 feet long, has no inversions, has a height of 64 feet, and a top speed of about 34 miles per hour. I know what you’re going to say, you’re going to say that this one is going to be rough as most of the coasters from Vekoma are. I would agree with that assessment as, generally speaking, most Vekoma coasters are a bit rough, but not this one. This coaster has the new Vekoma inverted family steel coaster trains. These trains don’t have the over the shoulder restraints, just a simple lap bar, and shock absorbers where the seats connect with the running carriage on each car. Vekoma has gone to great lengths to make their coasters smooth and this is no exception.

This coaster was the world’s first roller coaster to have virtual reality (VR) on it and it is quite impressive. The VR section of the ride is the back half of the coaster and is no additional charge and it really is worth the experience. Riders are given headsets that are already turned on and are synchronized with the individual car (row) that you are in. In other words, when the video screen turns when the row you are in turns. You also almost have a full range of view so you can look up, down, left, and right and it looks like you are in that environment. You can also fire the gun which also rotates as well via a sensor on the right side of the goggles. I won’t spoil it but I will say that you are trying to defend your city from giant robots that are invading. 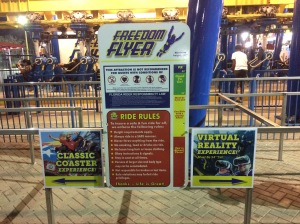 Click on the link below to see an off ride POV of Freedom Flyer.

Last but certainly not least, is the White Lightning wooden roller coaster from GCI. 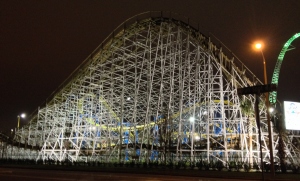 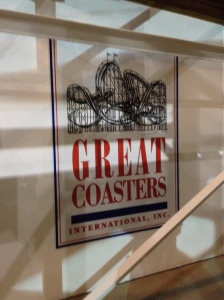 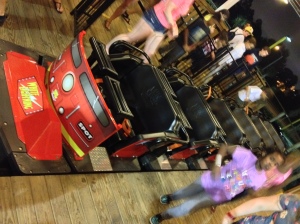 This coaster is an out & back wooden coaster in that it goes out to a point, then turns around and comes back to the station. This coaster may seem small and unimpressive but it really does pack a lot of moments of zero g which is called “air time” in the roller coaster industry and by most coaster enthusiasts. White Lightning is 2,032 feet long, is just under 70 feet tall, has a first drop of just over 67 feet, a top speed of just over 44 mph, and a total ride time of one minute and fifteen seconds. This coaster has one additional effect, it’s the first coaster from GCI to have a 90 degree banked turn at the far end turn around. Click on the link below to see an off ride POV of White Lightning.

Here are some photos of White Lightning with it’s unique chaser lights outlining most of the track.

There is a smaller area within this park called Gator Spot.

This area is run by the Gatorland Zoo in Kissimmee, FL and shows only a fraction of what they have at their main facility. Here, you’ll get to see over a hundred small Gators in several pools, a full-grown Gator, and a rare full-grown albino Gator. 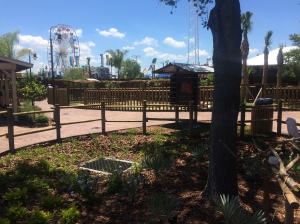 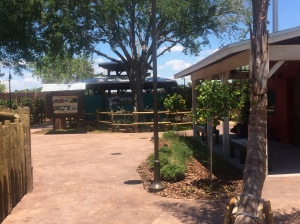 You can also see some new-born gators in the aquariums as they swim around. 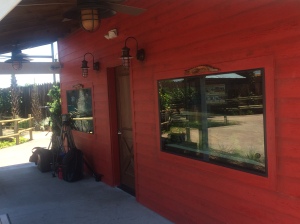 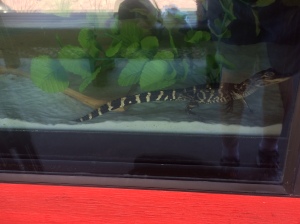 Harvey, the largest gator at Gator Spot, is 13 feet long and has his own habitat with his companion, Lolita. 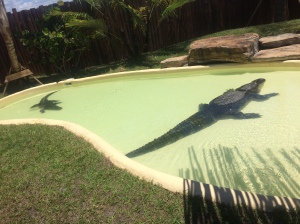 Last but not least is the star of this new area and his name is Bouya Blan.

Bouya Blan is a Creole word for “White Fog”. Bouya is a rare albino gator and was found in the Bayous of Louisiana in 1987. It is really fortunate that he was found in time as albino gators cannot survive in the wild due to the lack of pigmentation in the skin. That pigmentation helps him blend into his surroundings and acts as a natural sunscreen. Bouya is also known as a “bull gator” which means he is the alpha male and he gets very aggressive to any other male that is in his area. 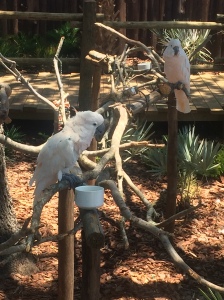 There are other things to see and do here as well like having your photo taken with a small gator, or you can visit the gift shop. While you’re walking around, I invite you to look down at the pavement occasionally as there are several different footprints in the cement.

This area is for attractions that were removed from the park and were replaced by another attraction. The first one is Air Raid.

This ride was manufactured by Zamperla, an Italian company, and was added to the park in November of 2014 and sits between the Freedom Flyer and White Lightning rollercoasters and is themed to the military propeller driven aircraft of the World War Two era. Unfortunately, this ride was removed in March of 2015 due to weather related problems but the park does promise they will be getting a better permanent park model version in the future.

This ride is quite smooth and very rerideable. The ride itself spins on a central axis with the individual arms spinning the gondolas like a propeller although nowhere near as fast as a propeller.

Here is my off ride video from my Themeparkfanatic channel on YouTube.

The Paratrooper is a classic ride from Chance Rides, It’s one of my favorite type of flat rides as it is quite fast. This one has an added bonus in that this one goes forward and backward. This ride was removed in 2019 and was replaced by Head Rush 360.

Well, that wraps up this review and I really hope you enjoyed reading this. Please check back occasionally as I try to keep them updated. I should also tell you that all these rides are either a pay per ride or you can buy different ride bands for any combination of rides, coasters, and go karts. Fun Spot and Gator Spot is definitely worth visiting if you’re in the Orlando area, they’re located on the north end of International Dr near Universal Orlando Resort at 5700 Fun Spot Way in Orlando, FL 32819 call them at 407-363-3867 for more information.